The temple is more than 1,100 years old. The temple is a replica of Mount Méru. The five levels of Bakong temple represent the five worlds: the underwater world of the Naga world, and the Gruda World. the human world, asura world, and devas world. There are 12 towers representing the 12 months or god of time. The central towers were built in the reign of Suryavarman II, in the style of Angkor Wat. While the old tower, which was built from brick in Indravarman I, was installed the Shiva Linga for dedicating him as the King of the nine immortal power and three realms. Another 8 brick towers were representing the eight directions and​ the abode of the eight cosmos such as water, earth, fire, wind, sky, sun, moon, and soul. The temple is surrounded by two mats and represents the seven great oceans.

In 802 AD, the first king of Angkor Jayavarman II declared the sovereignty of Cambodia. After ups and downs, he established his capital at Hairharalaya. A few decades later, his successors constructed Bakong in stages as the first temple mountain of sandstone at Angkor. The inscription on its stele (classified K.826) says that in 881 King Indravarman I dedicated the temple to the god Shiva and consecrated its central religious image, a lingam whose name Sri Indresvara was a combination of the king's own and the suffix "-Isvara" which stood for Shiva ("Iśvara"). Bakong enjoyed its status as the state temple of Angkor for only a few years, but later additions from the 12th or 13th centuries testify that it was not abandoned. Toward the end of the 9th century, Indravarman's son and successor Yassorvarman I moved the capital from Hariharalaya to the area north of Siem Reap now known as Angkor, where he founded the new city of Yasodharapura around a new temple mountain called Bakheng.

The site of Bakong measures 900 meters by 700 meters and consists of three concentric enclosures separated by two moats, the main axis going from east to west. The outer enclosure has neither a wall nor gopuram and its boundary is the outer moat, today only partially visible. The current access road from NH6 leads to the edge of the second enclosure. The inner moat delimits a 400 by 300 meters area, with remains of a laterite wall and four cruciform gopurams, and it is crossed by a wide earthen causeway, flanked by seven-headed Nagas, such as a draft of Naga bridge. Between the two moats, there are the remains of 22 satellite temples of brick. The innermost enclosure, bounded by a laterite wall, measures 160 meters by 120 meters and contains the central temple pyramid and eight brick temple towers, two on each side. A number of other smaller buildings are also located within the enclosure. Just outside the eastern gopura there is a modern Buddhist temple.

The pyramid itself has five levels and its base is 65 by 67 meters. It was reconstructed by Maurice Glaize at the end of the 1930s according to methods of anastylosis. On the top, there is a single tower that is much later in provenance, and the architectural style of which is not that of the 9th-century foundations of Hariharalaya, but that of the 12th-century temple city Angkor Wat.

The structure of Bakong took shape of a stepped pyramid, popularly identified as a temple mountain of early Khmer temple architecture. The striking similarity of the Bakong and Borobudur temple in Java, going into architectural details such as the gateways and stairs to the upper terraces, suggests strongly that Borobudur served as the prototype of Bakong. There must have been exchanges of travelers, if not missions, between the r kingdom and the Sailendras in Java. Transmitting to Cambodia not only ideas but also technical and architectural details of Borobudur, including arched gateways in the corbelling method. Moreover, Bakong has been selected as the model for building the Independence Monument in Phnom Penh.

Bakong temple of Rolous is one of many ruins situated in the Angkor area, meaning that this temple is also a part of 401 square kilometers-Heritage of Humanity and World Wonder by UNESCO on 14th December 1992. 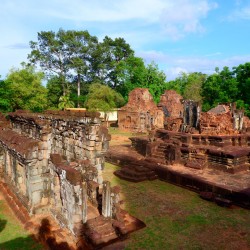 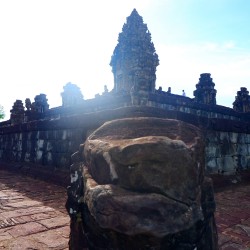 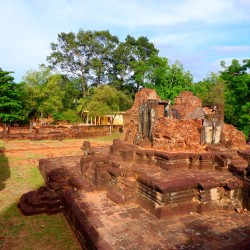