Angkor Wat Siem Reap Cambodia where history and nature coexist. Angkor Wat, the biggest and most divine religious structure, shows the advanced architecture of the Khmer Empire. In the Angkorean era, the ancient Khmer Kingdom dominated most of present Southeast Asia from 800 to 1430 AD. The Angkor Complex is the soul of the Khmer people (approximately 90% of Cambodia's population).

The Angkor complex area consists of 200 monuments, which are spread over an area of 401 square kilometers. In addition, Khmer kings built various Cambodian temples between the 7th and 13th centuries, when the Khmer civilization was at its height of extraordinary creativity.

What is The Location of Angkor Wat? and Who build this vast sophisticated temple?

Angkor Wat is situated around eight kilometers north of Siem Reap, a contemporary Cambodian city with a population of over 200,000. The Khmer Empire dominated the area for a while, and this structure functioned as their capital during that time. As a result, Cambodians refer to the capital city as "Angkor," whereas the name "Wat" refers to a temple.

The largest religious monument in the world and one of the most iconic structures of all time, Angkor Wat, was built almost 900 years ago. King Suryavarman II, the monarch of the land at the time, was a Hindu region follower. Hence Angkor Wat was originally constructed as a Hindu-styled temple. Nevertheless, this wonderful temple in Cambodia had become a Buddhist place of worship by the end of the 12th century. Archeologists are applying the latest techniques to reveal the mysteries of Angkor: A vast city the size of London.

The new monarch, Jayavarman VII, commanded all citizens to shift their situated city of Cambodia to Angkor Thom while moving their state temple to Bayon. The transition of moving to other temples was due to the attack of Khmer's rival tribe at that time.

As the power and influence of Angkor Wat grew within the context of the Buddhist faith practiced in the area, the folklore associated with the monument also expanded. According to some Buddhists, the temple was built on a single night by Lord Indra. On the other hand, scholars now know that Angkor Wat took many decades to construct, starting with the planning process and ending with the completion. In short, the building of the temple was started by Suryavarman II and completed by Jayavarman VII.

When Was Angkor Wat Built?

Angkor Wat is a Hindu temple complex built to replicate the heavens on earth, meaning "City Temple". It was initially constructed for King Suryavarman II in the early twelfth century, during his reign from 1113 to 1150 with astronomical and cosmic rhythm and Hindu influence dedicated to Vishnu. And, The architects of the ancient Angkorian civilization designed and gathered their creative ideas to build the temple where its position interacted precisely with natural phenomena, using skills of architecture, mathematical calculations, and astronomy. For example, the Solar Phenomena of Angkor Wat Equinox. It is the best-preserved temple and is the only one to have remained a significant religious center since its foundations; first Hindu, dedicated to Vishnu, and later Buddhist.

Who Discovered Angkor Wat in Cambodia?

Henri Mouhot, a French adventurer, "rediscovered" the site in the 1840s and said it was more impressive than anything bequeathed to us by Rome or Greece.

Henri discovered Angkor while examining the Mekong River's tributaries in Cambodia, Siam (Current Thailand), and Laos from 1850-to 60. Because of Henri, Angkor became renowned as a significant archaeological location in the West. When Henri visited the sovereign states of the many kingdoms or tribes, he was welcomed with open arms. But unfortunately, Henri was stricken with jungle fever in October of 1861, and he passed away only several weeks later due to the illness.

In 1867, the French built a mausoleum in his honor at Luang Prabang, where he was buried. Henri's long journey in the Central Areas of Indo-China, including Cambodia, Siam, and Laos between 1858 and 1860, he also made his documentation along these regions in 1864, which was reprinted in 1986.

For centuries after it had faded its political, cultural, and economic prominence in the early 13th century, Angkor Wat remained a sacred place for the Buddhist faith in the 1800s. Angkor Wat, on the other hand, was never completely abandoned. Instead, it progressively lost its usefulness and began to deteriorate.

Despite this, it remained a unique architectural achievement. Most likely, the praise results from the temple's architecture, which is meant to mimic Mount Meru, which Hinduism and Buddhism both believe is the dwelling of the gods. On top of that, Angkor Wat's five towers rising 65 meters above the ground are designed to represent the Hindu universe called Mount Meru, whereas the moat and walls that circle it show respect to the adjacent mountainous regions and the ocean.

Angkor Wat is an engineering masterpiece. The temple is the summary of the high classical style of Khmer architecture, called the Angkor Wat Style. This magnificent temple integrates two basic plans of Khmer temple architecture, including the temple mountain and the later galleried temple, which relied on early South Indian Hindu architecture.

Inside the compound is further evidence of the ancient Khmer's artistic skill in terms of decorative stonework and vivid carvings. The bas-reliefs on the western gallery depict the iconic scene of the Hindu epics the Ramayana and the Mahabharata that tells us about the Battle of Lanka in which Rama defeats Ravana and the Battle of Kurukshetra showing the mutual annihilation of the Kaurava and Pandava clans, respectively. The southern gallery shows the Kingship of Suryavarman II and the historical scene of the Khmer army and their allies heading to battle with the long-time enemy to the east, followed by the bas-reliefs of 32 hells and 37 heavens of Hinduism. The southern gallery of the inner complex demonstrates the stories of Hindu cosmology-a massive 49 meters heavenly tug-of-war (the Churning of the Ocean Milk) between 88 or 89 gods (Devas) and 91 evils (Asuras), using the serpent Vasuki to churn the sea under the Vishnu's direction. In addition to the galleries, the temple is also decorated with depictions of apsaras and devas, with nearly 2000 depictions.

This temple was constructed within a moat and an outer wall 3.6 kilometers (2.2 miles) long with three rectangular galleries, each raised above the next. The Vast square moat represents the oceans around Mount Meru legendary home of the Hindu gods. At the center of the temple stands a quincunx of towers. Unlike most Angkorian temples, Angkor Wat is oriented to the west, and this has scholars divided as to its significance. Furthermore, the temple is admired for the grandeur and harmony of the architecture.

Angkor Wat’s Reputation on the Regional and  International Stage

Another Historical event of Angkor Wat, this temple was listed and declared a World Heritage site by UNESCO on 14th December 1992 as Angkor Wat-Heritage of Humanity and World Wonder. Following an appeal for help by the late King Norodom Sihanouk, the temple was listed in UNESCO's World Heritage in Danger (later removed in 2004). It is the largest religious monument in the world and represents the country as a whole as it appears on Cambodian flags.

A decade later, the temple has been featured in various international film productions. One of the most well-known is the 2001 action-adventure film based on the Tomb Raider video game series featuring the character Lara Croft, portrayed by the most successful international actress, filmmaker, and special envoy to the United Nations High Commissioner for Refugees (UNHCR) Angelina Jolie, called Lara croft: Tomb Raider.

At the ASEAN Tourism Forum 2012, there was agreed that Borobudur and Angkor Wat would become sister sites and the provinces' sister provinces.

On top of that, the temple has also appeared on several documentary channels like National Geographic as Lost City of Angkor Wat (2008); CNA insider as The Mark of Empire: Cambodia's Temple Kingdom (2020); HISTORY as Ancient Aliens; The Architects of Angkor Wat (2020); Timeline of World History Documentaries as The Lost Citadel of Angkor Wat-The City of God-Kings (2017); etc.

Several events have been taking place inside the ruins of the Angkor Wat area ranging from sports to MICE events, both national and international events. One of those, the Angkor Wat International Half Marathon has been held annually and 2022, December 04 marked the 27th year of the event its presence since 1996.

The phenomenon of the sun rising exactly over the peak of Angkor Wat temple-which only happens twice a year- is part of many astronomical alignments indicative of a fairly elaborate system of astronomy and of the Hindu influence in the construction of the vast sophisticated complex. The twice-yearly event is a significant one for Angkor Wat to draw tourists annually who visit to take pictures. The bi-yearly solar equinox happens between March 20-21, called the Spring Equinox and the next equinox will take place between September 22-23, called the Autumn Equinox, from 5.30 am to 7.30 am respectively. On top of that, in 2022, Angkor Wat temple has been ranked as the top place in the world to watch the sunrise, according to a new study by the British website mornings.co.uk.

Another significant event developed by the Union of Youth Federations of Cambodia (UYFC) in collaboration with relevant ministries, Siem Reap administration, APSARA Authority, and other cooperative partners is called Angkor Sangkranta. The event is aiming at making a happy environment for Cambodia's participating and celebrating the Khmer New Year, making the young generation understand the Khmer Culture clearly and promoting conservation of the Khmer New Year culture, while also helping the tourism sector. Within the last five years since it began in 2013 to 2017, the event has been gradually bigger from one year to the next and impacts from one place in Siem Reap to many other places across the nation based on the will of our compatriots. Moreover, in 2015, the event also allowed the Kingdom to break the two additional Guinness World Records with the world's largest Madison dance, involving 2,015 participants, and the world's largest traditional sticky rice cake, which weighed 4.04 tons.

Although it sustained significant damage while under the dictatorial leadership of the Khmer Rouge government in the 1970s and in previous regional wars. The restoration and conservation regulations and projects of the temple have been gradually carried out by many actors both domestically and internationally; for example, the Zoning area was set up to protect the Angkor site in 1994, APSARA Authority was established in 1995 to protect and manage the area, and law to protect Cambodian heritage was passed in 1996, the nearly 30 years of work between UNESCO and its international Co-ordination Committee for the Safeguarding and Development of the Historic Site of Angkor (ICC) in collaboration with representatives from the Royal Government of Cambodia and APSARA authority.

The site has become a major tourist destination since the 1990s. There were only 7,650 and 25,294 in 1993 and 1994, respectively. The figure for international tourists visiting Angkor Wat hit one million and two million in 2007 and 2012, respectively. As of 2019, the total accumulated of international tourists who visited Angkor Wat temple is approximately 28 million.

In 2020 and 2021, Angkor Wat like many other sites across the globe has been severely hit by the COVID-19 pandemic due to the spike in travel restrictions; as a result, the number of visitors plummets. However, for the first four months of 2022, Angkor Wat has backed on its trace by attracting 33,205 visitors, an equivalent to a 622 percent increase compared to the same time in 2021. The recovery of the tourist figures is an outcome of the reopening of Cambodia to the tourists, the number of vaccinated population, and other gradually lifting of the travel restrictions. 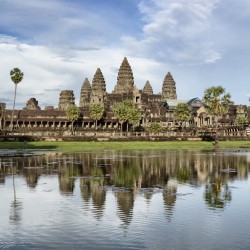 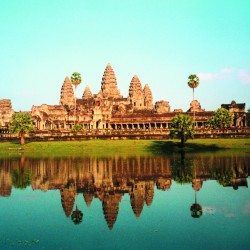 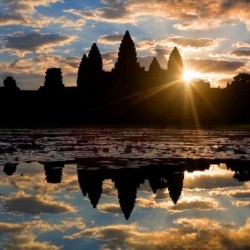 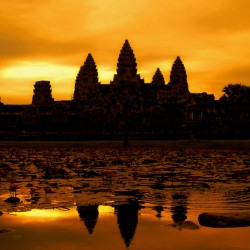