Prasat Preah Vihear is made up of three words: Prasat, Preah, and Vihear. Prasat is translated to as temple in English, yet the word itself was found in Sanskrit as a religious offering. Furthermore, Preah refers to holy or sacred in this factor. Lastly, Vihear is a simplified word from a Vihara word in Sanskrit, referring to a shrine. Therefore, in English, Vihear is a religious temple building.

In the 9th century, Khmer King Yasovarman I (889-900) originally began work on the construction of a small sanctuary then named Sekharesvara “Lord of Summit” and dedicated to Shiva. Spiritual development, increased political power, and economic growth were factors that inspired the Khmer kings to the architectural imagination.

Based on the inscriptions (founded in the temple such as K.380, K.381, K.382, and K.383), it took more than 300 years to construct the whole temples during the reigns of subsequent kings. Among those, there are four kings who prominently built and renovated the temple, including Yasovarman I (889-900), Suryavarman I (1002-1050), Jayavarman VI (1080-1107), and Suryavarman II (1113-1150) in the various structures that merged into a homogenous Hindu universe called the magical home of gods. All forms of this temple are the basics of Khmer Arts including planning, building drafts, and other sculptures.

In 1904, Siam (Thailand) and the French colonial authorities ruling Cambodia formed a joint commission to demarcate their mutual border to largely follow the watershed line of the Dangrek mountain range, which placed nearly all of Preah Vihear temple on Thailand’s side. In 1907, after survey work, French officers drew up a map to show the border’s location, the map called Annex I map. Following the withdrawal of French troops from Cambodia in 1954, Thai forces occupied the temple to enforce their claim. Cambodia protested and in 1959 asked the International Court of Justice to rule that the temple and the surrounding land lay in Cambodian territory. The case became a volatile political issue in both countries. Diplomatic relations were severed, and threats of force were voiced by both governments.

Under the premiership of the late King Norodom Sihanouk, the late King and his subordinates had tried all their best in demanding peaceful talk. Moreover, the resulting topographic map, which was sent to Siamese authorities and used in the 1962 (ICJ) ruling, showed the line deviating slightly from the watershed without explanation in the Preah Vihear area, placing all of the temples on the Cambodian side. Finally, on 15th June 1962, the International Court of Justice at Hague judged in unanimity (the court ruled 9 to 3) that the temple belonged to Cambodia and, by a vote of 7 to 5, that Thailand must return any antiquities such as sculptures that it had removed from the temple. This enthusiastic news had spread across the whole country that made all Khmers very happy and cheerful to congratulate accepting this temple which was becoming as the Khmer Heritage as before. For this testimony of satisfaction, the chief of state, the late King Norodom Sihanouk made a formal vising to Preah Vihear to be the symbol of Khmer Heritage on 5th January 1963.

All countries around the globe would always wish to become members of the Regions, Trade Block, or other world organizations in order to develop their own country. The Royal Government of Cambodia had tried its best to integrate itself to become those members. On July 3, 1951, Cambodia joined UNESCO, 6 years after this UN agency was established on November 16, 1945. Upon membership, the Royal Government of Cambodia proceeded to establish a National Commission. On August 5, 1955, the first Cambodian Delegate to UNESCO, His Royal Highness Prince Norodom Norindeth, presented his credentials to the Organization. Unfortunately, due to the internal conflict, the Cambodia National Commission had to shut down in 1975 and all UNESCO missions and operations within the country were deferred. Nearly two decades later, the reopening of the UNESCO Office in Phnom Penh in 1991 contributed to the strengthening of cooperation between Cambodia and UNESCO.

After Angkor Archaeological Park was listed and declared a World Heritage site by UNESCO on 14th December 1992 as Angkor Wat temple and many other temples within 401 Square Kilometers of Land-Heritage of Humanity and World Wonder. About two decades later, the Royal Government of Cambodia nominated the Temple of Preah Vihear in the tentative list of UNESCO. On June 30, 2006, Cambodia submitted the decision files to UNESCO headquarters based in Paris. Nearly three months after the submission, there was the one-week technical mission of representatives of the International Councils on Monuments and Sites (ICOMOS) at the Temple of Preah Vihear. Later, the ICOMOS approved the tentative list of Preah Vihear temple on January 21, 2007. On July 7, 2008, the Preah Vihear temple was officially declared a World Heritage site by UNESCO in Quebec City, Canada, with unanimity supported by other twenty-one country members.

The Preah Vihear temple is a Khmer temple located spectacularly atop Poi Tadi, slightly east of the midsection of the mountain range of the Dangrek, being in Svay Chrum Village, Kan Tout Commune, Choam Khsant district, in the Preah Vihear province of northern Cambodia. It is also perched on the edge of a giant cliff, 525-meter (1,720 feet) above the Cambodian plain and 625-meter (2,051 feet) above sea level. Lying out on an 800-meter north-south axis, the Preah Vihear complex has a single imposing approach, leading up through a series of five Gopura (towered entrance pavilions) connected by causeways and 120-meter-long steps. The temple gives its name to Cambodia’s Preah Vihear province and is 140km from Angkor Wat; approximately 460 km from Phnom Penh.

Want To Have A Visit To Preah Vihear?

Preah Vihear is different from most Khmer temples because it was built along the north-south axis instead of the typical rectangular outline that faces east. Preah Vihear is the name of the temple and the Cambodian province where the temple is located. However, Thailand calls it Khao Phra Wihan national park, located on the border of Sisaket province, Thailand. From the Thai side, tourists and local people are restricted to the temple.

Preah Vihear is ideally suggested to visit during the end and early of each year, as temperatures are pleasant and moisture levels are comfortable. Due to the need for extensive trekking, the ideal time to visit is around this peak period.

Moreover, as the main temple is kilometers away from a parking station, you will have to walk along extended mountainous rocks with a few trees along the way up. Therefore, if you are already staying in the Preah Vihear province, a morning trip to Prasat Preah Vihear would be the nicest time. The weather will most likely be cooler and nicer. Therefore, you will not sweat the shirt as you walk kilometers up to the temple.

From the bottom, you will need to buy a car ticket in order to get to the temple base. The road trip will be around 6 to 7 km up to the mountain. Once the car departs, you will see beautiful nature and experience an astonishing atmosphere along the road. As the car gets closer to the mountain, you will start to see steeper and steeper roads.

But do not feel nervous. The car is designed to drive on steep roads, so you can just hold the car’s stage firmly. Of course, some tourists cannot bear it. Thus, they tell the car drivers to stop. Then, they walk slowly up the road.

Be sure to have a passport on hand! You will be asked for a passport to purchase a ticket.

How Long Does It Take To Arrive At Preah Vihear?

It depends on which locations you are at. Preah Vihear is close to Siem Reap province. You can find a local taxi that will arrive at your destination in 4 hours.

However, traveling from Phnom Penh will take a 7-hour road trip to the temple and 5 hours to arrive at the province. Nevertheless, traveling by bus might take 1 hour longer than a regular taxi or VIP car. 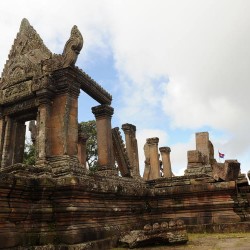 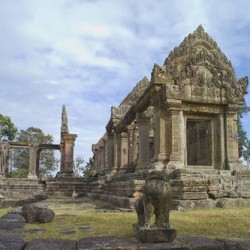 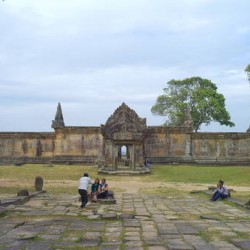 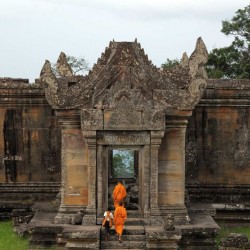 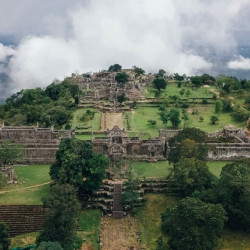 The National Museum of Cambodian in Phnom Penh is the country&rsquo;s leading historical a [...]