This temple was constructed more than two centuries before Angkor Wat. It served as King Yasovarman I’s state temple at the center of his new capital city Yasodharapura. And, it is a Hindu temple originally built in the form of a temple mountain dedicated to Shiva. The foundation of Bakheng is carved from the existing rock edifice rather than the laterite earth fill of most other temples.

Phnom Bakheng is a symbolic representation of Mount Meru, home of the Hindu gods, a status emphasized by the temple’s location atop a steep hill 65 m above the surrounding plain. The temple is built in a pyramid form of seven levels, representing seven heavens.

Historically, Phnom Bakheng had been a Buddhist temple before it was converted to Hindu. By that time, 2 additional buddha sculptures were installed at the temple. However, both of these sculptures have been off-tracked over time, and only their approximate shapes remain.

The temple is built on a mountain; therefore, the foundation is based on mountainous rocks. In addition, it rises five stories from a rectangular foundation, with the five major towers above each tier. In order to ensure that the tower maintains perfect symmetry, smaller towers of a total of 104 are spread out among the lower tiers.

In a nutshell, Phnom Bakheng is a gigantic calendar of the heavens with the central tower illustrating the world’s axis. At the same time, the other 108 towers describe 4 lunar phases. Each phase contains 27 days.

Moreover, since Cambodia encountered so many civil wars in the past, the temple has lost a lot of details. Simultaneously, many smaller towers have gone down along with erosion due to aging. For now, only some of them remain intact.

Arriving At The Top of A Beautiful Bakheng

Before sunrise, it is really quiet at the top. As you arrive at the peak, the darkness slowly fades away. From there, you stand like a rooftop of the planet, surrounded by foggy clouds. It seems the sky is floating. When morning breaks, it creeps up on you so subtly that you hardly notice it until all of a sudden you see that the world is no longer in complete darkness.

As the sun rises higher in the east, a soft yellow glow spreads over a grayish cloud wall as high as a rock on the distant horizon. Moreover, while looking to the south, you may capture the identical picture that may be seen with the exception of a little island-like formation that resembles a cat sleeping on its back and is located along a low slope.

On the western side, you can see the great Baray turning silver. The morning atmosphere is completely calm. However, you may see trees swaying forcefully, signifying the awakeness of monkeys.

A Journey To Phnom Bakheng

Located atop a hill, Bakheng nowadays is the most popular tourist spot for sunset views, offering a view of the Tonle Sap Lake and a distant Angkor Wat temple which lies amid the jungle about 1.5 km away.

To reach the peak requires a significant ascent, and the stairs toward the peak are really narrow. But, it has a road along the ascending slope to make it smoother just below the peak. To reach the summit, you have to take a 20-minute walk up along the trail or you also could pay for the elephant ride if you wish to.

Regarding the price, it may fluctuate depending on the seasons. At the time of writing, the elephant ride costs $15. However, the price might increase during peak season. Therefore, this information provided would give you a floor price to bargain with elephant owners in case they charge you a lot.

As you arrive at the temple foot, you will be excited with the nature and wind blowing along the road. After that, you will need to climb many steep stairs in order to reach the peak of the temple. At peak hours, those steep stairs might get extremely congested; thus, you should take additional precautions.

After seeing the sunset, it will probably be dark along the way down. If you visit the temple during the bright season, you will be lucky to have a moon shining brightly at night time. As you arrive at the bottom, you will have many fueled rickshaws (Tuks Tuks) queuing to locate you to the city. You can pick one of them and come back to the city to enjoy your nightlife.

Bakheng temple is one of many ruins situated in the Angkor area, meaning that this temple is also a part of 401 square kilometers-Heritage of Humanity and World Wonder by UNESCO on 14th December 1992. 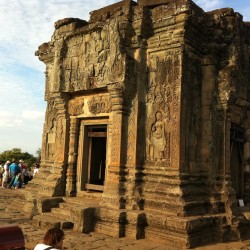 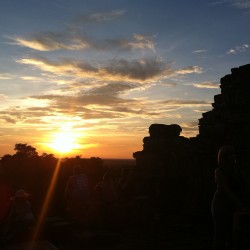 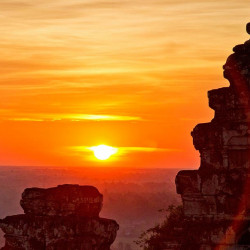 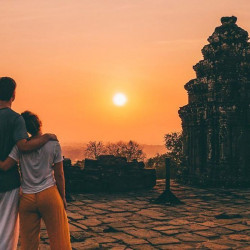