The Wat Phnom Temple is the most significant of all the temples in Phnom Penh. The temple has a close-knitted relationship with the capital city. This in effect is a sanctuary founded by Daun Penh (Grandma Penh), a wealthy widow who in 1372, retrieved from a river a log with five Buddha statues in it and ordered to elevate a piece of her property on which to build a temple to house the statues. The 27 meters high man-made hill became known as Wat Phnom. The Chedey and temples of Wat Phnom were renovated several times, in 1434, 1806, 1894, and 1926, and each year of renovation made the sanctuary looks better.

The wealthy widow was called Penh or Daun Penh where her house was located on a hill near the bank of rivers. One day, there was heavy rain, Grandma Penh found the Koki trees floating in the river. Then, she hurried to call her neighbor to help pull the tree out of the river. After clearing the mud, inside the tree she found four bronze statues of the Buddha and one standing stone statue of a goddess where one of his arms was a baton and another side was a snail. Grandma Penh and her neighbors were very happy to have found the sacred statues. Then, Grandma Penh constructed a small shrine on an artificial hill made by the people living in the village to protect the sacred statues. Later on, Grandma Penh and the villagers converted to build a temple on the top of the mountain and brought the four Buddha statues to the temple. While a standing statue of the goddess was placed in a shrine located on the eastern of the hill. Eventually, this became a sacred site and sanctuary where people would make blessings and pray.

Over the years, Wat Phnom Daun Penh has had numerous add-ons to the initial shrine that dwelt within the compound of this wonderful sanctuary. The most significant of which is the massive stupa that enshrines the ashes of King Ponhea Yat who in 1434, arrived and built the city of Phnom Penh.

Wat Phnom has a legacy of legend and historical tags that dates back to the establishment of Phnom Penh in the 14th century. The statue of King Sisowath which is located at the southern downhill of Wat Phnom. It is also one of the most significant historical legacies doing the era Cambodia was under the French protectorate. Because this statue was a symbol of deliverance the territorial integrity of Siem Reap, Battambang, and Serei Sophorn was under the rule of King Khmer. King Sisowath was selected by a special member council for the royal palace to hold the royal crown in 1906 AD, after King Norodom's death. At that time, He was 64 years. Prior to the coronation of King Sisowath, he was a brave general, who was not afraid of leading the army against the rebel (AD 1861-1884). He was loved by his people due to his generosity, gentleness, compassion, and kindness. He built a high school behind the Royal Palace called “Sisowath High School” when he ascended the throne. During his reign, besides building a Royal Library to store the book of Dhamma and Laws for people to study, he built a Pali school for teaching the Tripitaka (in Khmer Preah Trai Bekdok), an art school, and a national museum for people to study theology, and built a law school for civil servants. There is another important point in 1907, the Siamese Kingdom signed a treaty with French protectorate, which gave Battambang, Sisophon, and Siem Reap to Cambodia after Stung Treng, Mlo Prey, and Tonle Pov was once returned to Cambodia in 1904. It is because of all his achievements, which led to the construction of the statue above as symbolic in the south of Wat Phnom since then.

But the statue as seen today is not the original statue, it has just been copied from the original as requested by the Phnom Penh Authority in mid-January 1998. The copied statue is built from cement, while the original was stored at the National Museum by the Director of the Archaeological Conservation Department after the March 18th, 1970 event. The original was made of most of the copper-based metals in 1909. If we look at the statue, we found that at the top of the left there are two French Letters: RF (Republique Francaise), translated as the French Republic. On the right-hand side of King Sisowath, there was a flag of French which consist of blue, white, and red colors standing nearby a soldier the right-hand gesture hold the shotgun and place it with his foot, and the left hand pulled the flag over. On the right-hand side of the statue, there were carved the French words “Traite Franco-Siamois du 15 Mars 1907 Battambang, Siemreap, Sisophon” which translates in Khmer that the Treaty of France, March 15th, 1907, Battambang, Siem Reap, Sisophon. And under the French words, there was a picture of a French consular named Doroso de Consula, a consular of Battambang province in 1903 (based on Mr. Touch Chhoung’s document). At the last of both sides is an elephant head that appears from the inscription and at the center of the statue is a royal throne decorated by the three-head Naga. His majesty Sisowath sat under the royal nine-tiered umbrella and was glorified as reign king. On the right side, there are three ladies with different dresses holding censers in their hands. The first lady dressed up like Apsara and holds a censer with the statue probably from Preah Vihear temple. The Archaeologist concluded that the first lady holding the statue represents Siem Reap, while the two ladies represent Battambang and Sisophon respectively. Due to the two provinces being next to Siam that is why the women’s dress is similar to the servant ladies in the Royal Palace of the two countries (Cambodia-Siam) at that time. The Second lady holds the censer with green and yellow seal bags and the third lady holds the censer with a green-covered cylindrical container for keeping written documents. The three ladies conduct charity offerings to King Sisowath.

Beside the statue of King Sisowath, there is a pagoda named Wat Preah Chedey Borapaut, the Giant Clock (almost 20 meters wide, it is a gift from China in 2000. it replaces an earlier one installed in the early 1960s that was from France), and so on. Moreover, the southwest corner of Wat Phnom is a small shrine dedicated to Lady Penh or Grandma Penh. The front is often crowded with faithful bringing their prayers and food offerings to the woman deemed responsible for the founding of the wat.

Nowadays, Wat Phnom is open to the public both local and foreign, where is free access for the Khmer and a 1$ ticket for foreigners only. Wat Phnom has become a central attraction in the city and is a must-visit when in Phnom Penh, especially since it is the center of celebration during International New Year, Khmer New Year, and Pchum Ben festival.

Wat Phnom is recognized by the international community such as it appeared on the Travel Channel documentary “1,000 Places to See Before You Die”, it also served as the Pit Stop for the 4th Leg of one of the most famous reality television shows called “The Amazing Race 15”. 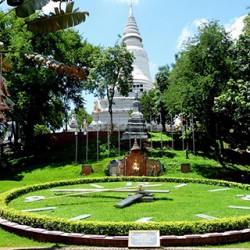 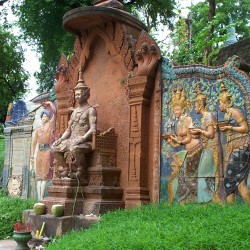 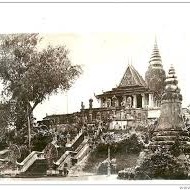 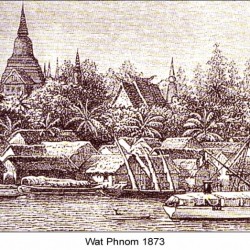