The Royal Palace of Cambodia is a complex of buildings although it is generally understood to be the Royal abode of the King of Cambodia. It was called in full name “Preah Barum Reachea Veang Chaktomuk Serei Mongkol”. The Royal Palace is considered as the representation of the whole nation and all temple complexes in the Royal Palace are painted in yellow, representing Buddhism and white representing Hinduism. It faced towards the East and is situated at the Western bank of the cross-division of the Tonle Sap and the Mekong Rover called Chaktomuk.

The buildings in the Royal Palace were built according to the traditional architecture by Nak Oknha Tep Nimith Mok, a great architect at that time. Many temples are shaped by  fancy design, with classic Khmer roofs and ornate gilding, and the beautiful towering spires, whihc symbolizes endless growth.

Along with numerous other interesting buildings, within the 183,135 square meters (The Royal Palace has a rampart around 1772 meters by the eastern rampart lengths 421 meters, the western lengths 435 meters, the Northern lengths 484 meters and the southern lengths 432 meters. These solid rock ramparts were adorned with a front panel, which was built in 1866 - 1870 during the reign of King Norodom.) compound is, of course, The Khemarin Palace, known as Prasat Khemarin meaning the “Palace of the Khmer King”. This is officially the residence of His Majesty, King Norodom Sihamoni. The establishment of the Royal Palace in Phnom Penh in 1866 is a comparatively recent event in the history of the Khmer and Cambodia.

The Preah Tineang Tevea Vinnichay Mohai Moha Prasat means the “Sacred Seat of Judgement”. The hall is where the King’s confidants, generals, and royal officials once carried out their duties. It is still in use today as a place for religious and royal ceremonies such as coronations and royal weddings, oath of allegiance for the senate, assembly, and government before taking the office as well as a meeting place for distinguished guests of the King. The cross-shaped building is crowned with three spires. The central, 59-meter spire is topped with the white, four-faced head of Brahma. Inside the Throne Hall contains three royal thrones (one is more of western style and the other two are traditional) and golden busts of Cambodians kings and queens starting from the reign of King Ang Doung onwards. This Throne Hall is the second to be built on this site. The first was constructed of wood in 1869-1870 under King Norodom. That Throne Hall was demolished in 1915. The present building was constructed in 1917 and inaugurated by King Sisowath in 1919. The building is 30x60 meters. As with all buildings and structure at the Palace, the Throne Hall faces east and is best photographed in the morning. When visiting note the thrones (Reach Balaing in front and Preah Thineang Bossabok higher at the back) and the beautiful ceiling frescoes of the Reamker. To the north of the thrones stands the statue of His Majesty Sisowath Monivong standing holding the Royal Sword. The statue is made of gold and shows him dressed in casual clothes. While to the south of the thrones stands the gold statue of His Majesty King Sisowath sitting on the Preah Thineang Bossabok dressed and covered with the Royal Regalia of Cambodia (as you can see he is wearing the Crown, the Sopourna Bat or the royal footwear and in his right-hand holds the Royal Sword. He sits on the Preah Thineang Bossabok which is made to look like the real one to the right.

The traditional throne or The Preah Tineang Bossabok is an ancient nine-level classical Khmer-style throne. Each Khmer King has to be seated on it on the coronation day while wearing the Royal Regalia. It is covered with intricate floral carvings and has two levels of small statues of Garudas lifting the upper part of the bossabok. Three of the nine levels of the throne represent the levels of hell, middle earth, and the heavens. Surrounding the bossabok are the four gold nine-tiered umbrellas, these are called the Aphirom. Finally, the bossabok is topped by the white Royal Nine-tiered umbrella that signifies the universal power the king has. In front of the bossabok is the throne. The table that stands next to the Royal Throne holds on it a golden tea set and the golden set of betel and areca nuts container set, which is part of the regalia and are always on the table, or otherwise called the Pean Preah Srei. Behind the preah thineang bossabok is another bossabok called the Preah Tineang Nearyrath Sophea, the Preah Thineang Bossabok is for the king and the Preah Thineang Nearyrath Sophea at the back is for the queen. Like every king has to sit on the front bossabok, every queen also needs to sit on the taller bossabok behind. After sitting on the bossaboks while wearing the regalia, the kings and queens will be escorted to their palanquins to be paraded around the city.

The Preah Thineang Chan Chhaya or "Moonlight Pavilion", is an open-air pavilion that serves as the stage for Khmer classical dance in the past and present. It is one of the most notable buildings of the palace as it easily seen from the outside as it was built alongside a section of the palace walls. The Chan Chhaya Pavilion has a balcony that was used as a platform for viewing parades marching along Sothearos Boulevard of Phnom Penh. The current Pavilion is the second incarnation of the Chanchhaya Pavilion, this one constructed in 1913–14 under King Sisowath to replace the earlier wooden pavilion built under King Norodom. The current pavilion is of a similar design as the earlier version. The Chanchhaya Pavilion dominates the facade of the Palace on Sothearos Blvd. The Pavilion serves as a venue for the Royal Dancers, as a tribune for the King to address the crowds and as a place to hold state and Royal banquets. Most recently, the Pavilion was used for a banquet and a tribune for the new King at the 2004 coronation of King Norodom Sihamoni.

The Silver Pagoda is a compound located on the South side of the palace complex. It features a royal temple officially called Preah Vihear Preah Keo Morakot but is commonly referred to as Wat Preah Keo. Its main building houses many national treasures such as gold and jeweled Buddha statues. Most notable is a small crystal Buddha (the "Emerald Buddha" of Cambodia) — undetermined whether made of Baccarat Crystal in the 19th century or of another kind of crystal in the 17th century — and a near-life-size, Maiterya Buddha encrusted with 9,584 diamonds dressed in royal regalia commissioned by King Sisowath. During King Sihanouk's pre-Khmer Rouge reign, the Silver Pagoda was inlaid with more than 5,000 silver tiles and some of its outer facades was remodeled with Italian marble.

There are also other structures surrounding the main building or the Vihear. To the east is the statue of King Norodom sits on a white horse. To the north of the Vihear is the library. At the northwestern corner is the bell tower and south of that is the model of Angkor Wat. South of the Vihear stands four structures: from west to east the Chedi (stupa) of H.M. King Suramarit and Queen Kossamak, the Dharmasala, the Chedi of Princess Kantha Bupha and The Phnom Mondop (mount mondop) where the statue of Preah Ko is situated. The wall that surrounds the structures is covered with the painting of the epic story of Reamker but because neglected care, the bottom half of the painting faded throughout the years.

The wall that surrounds the structures is covered with murals of the Reamker painted in 1903-1904 by Cambodian artists directed by the architect of the Silver Pagoda Oknha Tep Nimit Mak.

The Khemarin Palace is the common English name for a building called Khemarin Moha Prasat or in Khmer meaning the "Palace of the Khmer King." It is used as an official residence of the King of Cambodia. This compound is separated from other buildings by a small wall and is located to the right of the Throne Hall. The main building is topped with a single spired prang. Her Majesty Queen Kossamak on a palanquin in the inner court, behind is the Khemarin Moha Prasat, the King's residence.

The palace has always been a popular tourist attraction in Phnom Penh for both local and International visitors. Tourists can visit the Throne Hall (Preah Tineang Tevea Vinichhay) where coronations and official ceremonies take place, the temple of the Emerald Buddha (Wat Preah Keo Morakot), Stupas (Chedei), a Royal Dining Hall, the Chan Chhaya Pavilion (Moonlight Pavilion) and a French-Style building that a gift from Napoleon III. The King's living area, which actually takes up half of the total palace ground area, including Khemarin Palace, Villa Kantha Bopha, Serey Mongkol Pavilion, royal gardens, and a number of other buildings and pavilions, is closed to the public.

Visitors need to wear shorts that reach to the knee, and T-shirts or blouses that reach the elbow; otherwise they will have to buy an appropriate sarong as a covering at the ticket booth. The entrance fees for the Royal Palace and the Silver Pagoda will be different between the local and the International visitor, which are 1,000 riels per person and 40,000 riels per person, respectively. 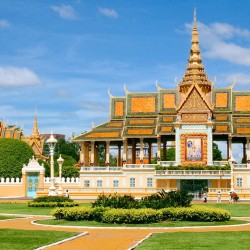 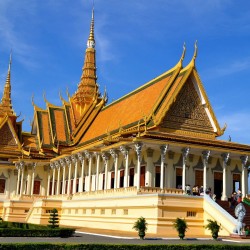 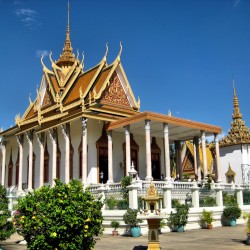 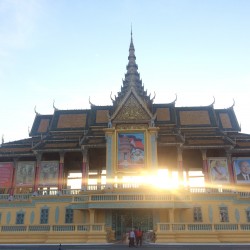 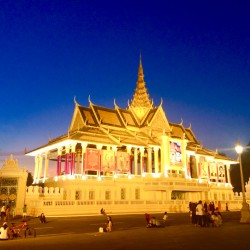