Being one of many repertories of Cambodian Classical dance, Robam Moni Mekhala (របាំមណីមេខលា), highlights the Cambodian mythology of thunder, lightning, and rain that is related with Buddhist and Hindu superstition.

To a large extent, this dance represents Ream Eyso's battle with Moni Mekhala, in which he strives to take Moni Mekhala's mystical crystal ball. What is Mekhala Meaning? She was the goddess of the sea.  In contrast to her, Ream Eyso was a demon. Lok Ta Moni Eysei, a knowledgeable and strong hermit, educated them both as his favorite pupils.

The Cambodian Myth of Lightning, Thunder, And Rain

There is a connection between this dance and the myth of Moni Mekhala (Water Goddess) and Ream Eyso (The Storm Spirit). Once upon a time, Lok Ta Moni Eysei formerly dwelt in the forest's heart. He was a teacher who had a magic ball and intended to give it to one of his most committed pupils as a reward for their hard work. This powerful and wise hermit had three students: Moni Mekhala, Ream Eyso, and Vorachcun. However, he had a hard time deciding which of his outstanding students deserved the ball the most.

The hermit issued a challenge to his pupils, telling them to go out and gather a glass of morning dew, and the champion would be the first to deliver it. And as a return, the magical crystal ball is the prize for the winner.

Following that, each of the three finalists went out in search of morning dew. To get the fluid, Ream Eyso and Vorachhun went into the jungle.

When Vorachhun and Ream Eyso arrived, they discovered Moni Mekhala had successfully already poured the morning dew into her glass. She hung her shawl outside her door overnight, and in the morning, she squeezed the dew off of it into the glass.

The Prize And Surprise

Moni Mekhala received the crystal ball as a prize from the hermit, who was delighted with all three of his pupils. Vorachhun and Ream Eyso received a magic dagger and a magical diamond axe, respectively.

It's no secret that Vorachhun and Ream Eyso are jealous of Moni Mekhala, so they attempt to flatter and seduce her to win her favour.  It's off the table for the Water Goddess. She snubs their approaches and mocks their attempts, making them seem foolish.

After that, Ream Eyso decided to seize the crystal ball by whatever means necessary. He ran upon Vorachhun along the road and killed him by throwing him down a cliff.

After swinging his diamond axe in wrath, Mekhala released her crystal ball in the air, which generated lightning that blinded the demon.

The devil managed to throw away his axe, and as it travelled through the air, it sliced along through clouds, causing thunder to occur. And Ream Eyso is compelled to admit defeat after being continually vanquished, which frustrates him to no end.

Seeing Ream Eyso up close, Moni Mekhala worries about what would become of the vulnerable man. Her instructor, Lok Ta, had taught her compassion, so she decided to pardon this demon. After that, she took off towards the skies.

After some time has passed, the demon reclaims his axe and his strength and begins to pursue her. Afterwards, lightning, thunder, and rain proceeded to sweep the planet.

Vorachhun, whose complexion was as golden as a rice field, was invigorated by the raindrops. He then snatched his dagger and flew into the skies to find the demon and sea goddess.

As a result, whenever lightning collides with thunder, many think that Ream Eyso is retaliating against Mekhala whenever rain falls from the sky.

Moni Mekhala was different from the other women in the Royal Ballet of Cambodia because she showed up wearing a blue silk shirt made from short sleeves and held a mystical crystal ball named "Keo Moni."

One thing that sets Ream Eyso apart from other yakshas (giant) figures is his magically-enhanced mask, which has an ornamental hamsa tail crown.

The pinpeat often accompanies Khmer classical dances, and Robam Moni Mekhala is no exception. Other musical instruments like gong, xylophone and other percussion instruments may be found in this style of the orchestral group.

The choruses for Robam Moni Mekhala are also made up of a group of singers. They sing without music most of the time, and their lyrics are written as poetry.

The Symbolism and Meaning of Robam Moni Mekhala Dance

The story of Moni Mekhala and Ream Eyso has been narrated and seen in both Buddhist ceremonies and traditional Cambodian dance. This traditional dance is conducted during Khmer New Year, a propitiation (buong suong ) rite commemorating the springtime cropping cycle.

In Cambodia, the intricate buong suong ritual is created to conjure the rain, therefore ensuring the productivity of the soil and the welfare of the people.

For hundreds of years, Cambodian royals have been performing Ream Eyso and Moni Mekhala in their palaces. This dance has been celebrated for the sake of renewal, rebirth and regeneration concepts.

According to certain interpretations, this dance symbolises the triumph of virtue against enticement. The Moni Mekhala story is the pinnacle of Cambodian folklore.

Based on some researchers' beliefs, the protagonist of this dancing is an independent woman who battled the male figure Ream Eyso using her wistful intelligence. For Khmer classical dance, the most challenging female position is that of a strong and fast-reacting behaviour. 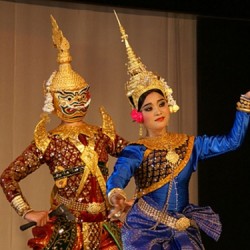 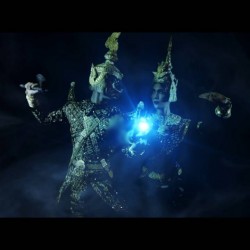 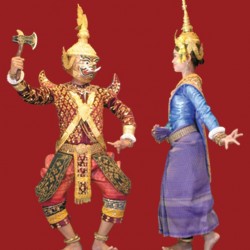 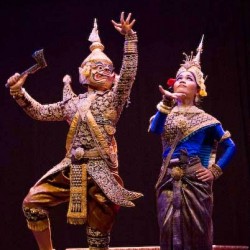 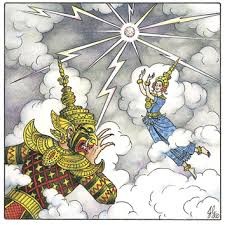 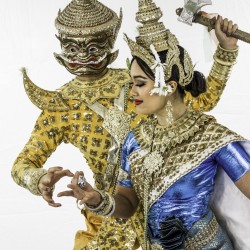 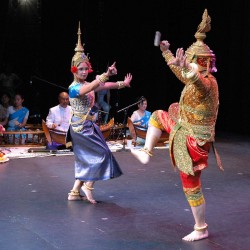 History Phnom Bakheng is a Hindu and Buddhist temple in the form of a temple mountain at [...]