In 1904s, Queen Sisowath Kossomak Nearirath Serey Vatthana, the wife of King Norodom Suramarit, was sent an invitation to visit the Sothearath primary school. While there she saw the schoolmistress prepare an inspirational Angkor Apsara dance performed by young school children in the paper Apsara costume including Crown, Sampot, and Flower, all referencing Apsara represented at Angkor Wat. The Queen got the idea to re-create the dance, which led her first granddaughter, Princess Norodom Buppha Devi, a daughter of Norodom Sihanouk, to become the first professional Apsara dancer of the modern era. The Princess started practicing the dance at 5 years old and danced Apsara for the first time during King Norodom Sihanouk's tenure. In 1967, the fine-boned young princess, clad in silk and glittering jewels, performed beneath the stars on the open pavilion within the palace walls, accompanied by the royal dance troupe and the Pinpeat orchestra. Selected by her grandmother, Queen Sisowath Kossomak, to become a dancer when she was only a baby. She toured the world as the principal dancer of the Apsara role.

The costumes reference from the Apsara on the Angkor Wat temple. In the past, the headdress of the lead Apsara has five points or tips, with two rows of spherical decorations like the Apsara pictured at Angkor Wat. Moreover, Headdress is worn by the subordinate dancers generally have three points and only one row of sphere decoration. And, this crowns often include garlands of artificial hair with ornate adornments. In modern dance routine, nowadays, the five points crowns are frequently absent.

There are various accessories for decorating and embellishing on dancers. The collar is embellished with detailed gold-colored copper ornaments and beaded designs. Furthermore, this round decorative collar (red colored) is highly visible, mostly found just below the neck. The elaborate decorations are usually found gracefully decorated on two separate rows. Additional copper ornaments are found hanging below these rows, in the shape of difficult-to-describe warped spear tips, the largest of which is centralized.

There are a total of four types of wrist jewelry: kong rak, patrum, kong ngor, and sanlek. The first is a truly beautiful diamond-like studded bracelet a fine and elegantly wrist jewel decorated in a tree branch-like fashion, the second is more of a spring-like coiled gold colored thick copper while the third type of bracelet (two sets are worn) are small round beaded orb/sphere bunches delicately connected to one another, the last bracelet is an intricate and well decorated thickly rounded jewel. Additionally, an Apsara dancer may be found wearing a garland of jasmine. Dangling earrings, which are bound in bunches, traditionally stretch almost to the shoulder. These dangling earrings are mainly duplicated from the design of the 'krorsang' flower (a large spiny tree with sour fruit) and are preferred to the 'metes' (chili) flowers, which are held to be less beautiful.

Two types of gold ankle jewelry are usually worn by the Apsara dancer, the first being kong tong chhuk the second kong ngor (or kong kravel). The sangvar is a loosely decorated band of beads worn crosswise. The golden flower is considered a body-decorating element, either worn on the waist or carried during the performance. It too is gold in color and made of thin flexible copper.

Apsara Dance or Robam Tep Apsara or Robam Apsara is a Khmer traditional dance created in the mid-20th century by Royal Ballet of Cambodia, under the patronage of Queen Sisowat Kosamak. The dance is performed by 5 or 7 females with graceful and sinuous gestures to narrate classical myths or religious stories. The costumes follow the Apsara on Angkor Wat temple. However, they are different depending on the Apsara roles. All dancers wear the same tops and headdresses (5-point crowns), and different colors of silk Somput Sarabab.

The Royal Ballet of Cambodia or Apsara Dance has been listed and proclaimed as a Masterpiece of Oral and Intangible Heritage of Humanity by UNESCO on November 2003. 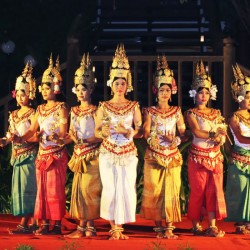 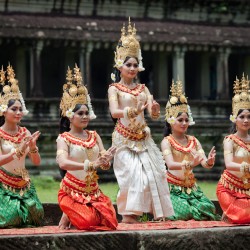 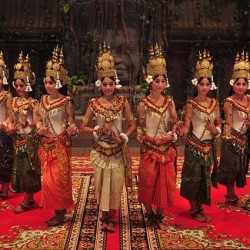 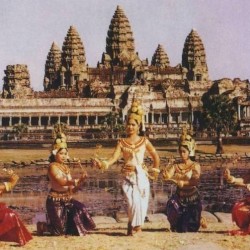 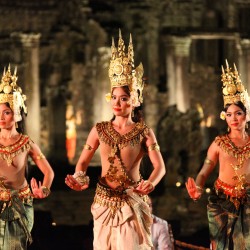 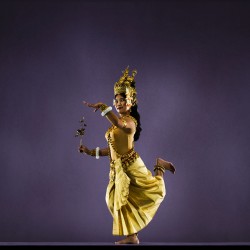 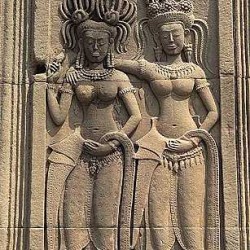 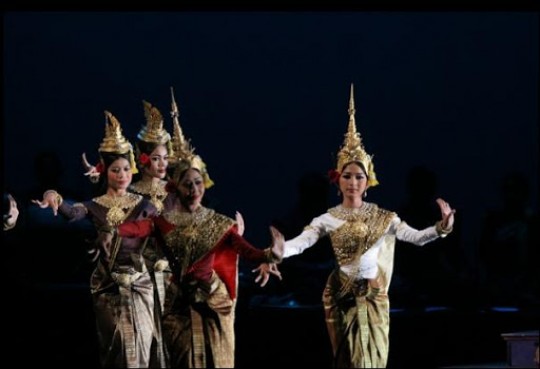 Lakhaon Poul Srei is believed to have originated from the Kingdom of Udong between 1618-16 [...]