There are some interpretations in writing but not detailed have found, which makes it difficult to determine the source of the chapters and the origin of Chapei. According to the interpretation of the term Pinn (Harp) in Khmer dictionary of Samdach Preah Sangkha Reach Chuon Nath, published in 2511 (Buddhist year), page 751, it is said that Pinn is a noun (in Bali Language called Vina) Chapei: means play Harp (in Khmer is Pinn).

However, we do not conclude that Chapei is a Pinn or Pinn is Chapei. Since both features and roles are very different. If we look at the pattern of Chapei, we will see that Chapei is a type of music instrument has fret (12) and the changing of sound varies according to the amount of space we capture. Distinct from Pinn (Harp) which has sound depends on each cable. If a Pinn (Harp) had 16 strings, it had 16 sounds. And if we look further away from Indian Veena (Pinn), most of them also have frets. But, we use the term Veena (Harp) to call the instruments from ancient time, which was carved on the walls as Pinn (Harp). In the opinion of the poet, Harp should be regarded as a separate instrument from a Chapei, and the Harp may have existed before Chapei. Since we can see the harp-like instrument on the ancient walls of Egypt, an ancient civilization of humanity, and we can find this harp at some of the indigenous tribes in the world.

According to the explanation of Oknha Tep Pitu Kror Sam Kuntha Bondeth about the history of Mahori orchestra, he stressed that “A musical group called Mahori is a type of Khmer musical which existed since ancient time, started with its own ideas at the time the Khmer came down in this country.” In the following, there is also a description of the original Mahori orchestra instrument which also includes Chapei. If we read the phrase “come down here in this country…” and “Chapei”, and based on historical events that our ancestors came to Phnom Penh in the year 1432. We can assume that the presence of Chapei in Khmer Culture occurred before 1432 (15th century). Harp is a musical instrument for god belief that plays in Pin Peat musical to dedicate to the god. In contrast to Chapei, a musical instrument influenced by Buddhism and for Khmer life such as the demonstration of Chapei in term of education and perform in wedding, Arak, and Mahori orchestras.

Curiously the Chapei Dang Veng is made utilizing carefully chosen wood, with the goal that when playing the instrument will make a delightful sound to draw in listeners and furthermore extraordinary creature (spirits). A concentrate to this impact can be found in the book, “A Brief Introduction to Khmer Music” by Buddhist scholar named Mrs. Peac Sal, published in 1969 where it portrays the making of the instrument.

Chapei Dong Veng has a long neck made of “Krasang” wood which can be steamed and bent. The body (sound box) is made of “Reang wood or Beng wood”, which is square with rounded corners. Some shaped liked a “Sloek Por” or a boddhisatva leaf and some like a pineapple and some like a pagoda Semaa (council/bulbous carving). While the face of the body should be made from the Khtom tree. The “toad” or “Sticking point” (tailpiece) is made from the Thnung tree, the frets are made from bone or heartwood, the pegs from neang nuen or popool thma wood and the strings are silk; As the rhyme goes: “the body is Reang, the neck is Kresang, the face is Khtom, the toad is Thnung, and the frets are bone”.

The body is around 50 cm long, the sound box is 34 cm across the front and the rear is 30 cm across the back and it is 6 cm deep. The length of the neck from the body to the Brorkien (bridge at the peg end over which the strings rest) or Thoreni is 60 cm and from the Brorkien to the Brorper (curved end of the neck, like a stretched out scroll) is 50 cm. Holes are bored for three or four pegs which take two or four strings, but are tuned to two pitched only; the two lower Ko strings are tuned in unison as are the two higher Aek strings. The neck is decorated with inlaid bone in intricate designs along its length beneath the strings which rest on 12 frets along the neck.

Chapei is used in four forms of art:
1. Functions in the Devil Orchestra (Pleng Arak)
In the Khmer belief, if anyone is sick because one of the four elements is water, earth, fire, and wind in the patient do not work properly. So they have to play the Arak music to facilitate the four elements in the body to be regular.
2. Function in traditional wedding orchestra (Pleng Kar)
Wedding’s orchestra is very important for the preparation of Khmer traditional marriage and the bride and groom because the lyric is implied education to people to love the natural treasures, belief, human being, and educate people to be patient, be responsible in life, cope with difficulty, to live dignified with virtuous, honest and truth.
3. Function in Mahori Orchestra
Mahori orchestra is divided into two groups: Mahori with Pinpeat instruments or Mahori with Vong Thom instruments and Mahori with String instruments. Each group, there are 12 musical instruments, and Chapei Dang Veng has existed in Mahori with instruments. But nowadays, Chapei Dang Veng is no longer used in the Mahori Orchestra.
4. The function of Chapei Dang Veng itself
Chapei Dang Veng is a tool for singing, and this singing is also used as a poem or Komrorng Kev which recall the rules of ancestral’ moral conduct in living, proverb or describing various stories folk. Most of the singing are delivered with beautiful sound and artists can choose to perform solo or couple. The singer was singing and playing at the same time. In the form of Chapei Dang Veng, Chapei Dang Veng is tuned follow the sound of a singer.

There are four big lyric music for playing solo and couple include:
1. Phat Cheay: used for chanting (virtue of the Buddhist trinity: The Buddha, his teaching and his discipline or Three Gem/Three Refuges and remind to the deeds of teacher and parents).
2. Som Poung: used for express sad feeling and nostalgia.
3. Phat Cheay Khlai: used for describe the long story.
4. Nor kor Reach: used for blessing.

Beside the above song, Chapei Dang Veng can use with many others music that is required by the stories and artists’ talented. These includes Bot Bom Pe, Sa Roam Mé, Sa Roam Mé Jerng Prey, Nor Kor Reach Jerng Prey, etc.

The "CHAPEI DANG VENG (A Cambodian two-stringed, long-necked guitar)" has been inscribed in the list of Intangible Cultural  Heritage in Need of Urgent Safeguarding by UNESCO on 30th November 2016. 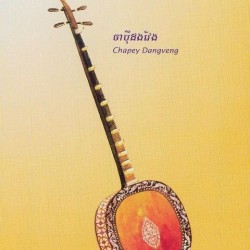 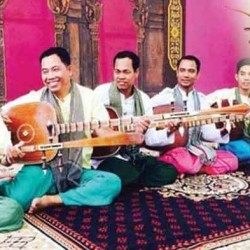 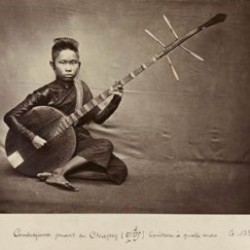 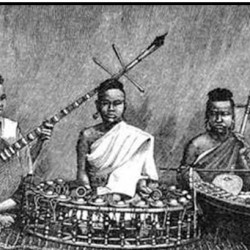 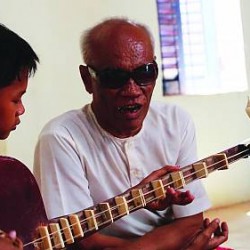 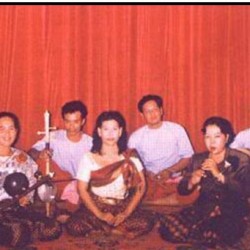 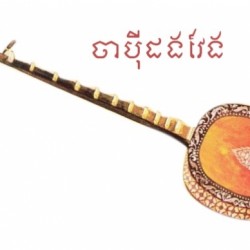