The noisy energetic capital is filled with far more color and culture, and some of the best places to witness the unmatched charm of the city are at its traditional markets. There should be plenty of time to go shopping in many markets. The Phsar Thom Thmei or the Central Market erected in Art Deco in the 1930s (1935-1937) and was once SEA’s largest market is a Phnom Penh landmark in the shape of a dome with four arms branching out into vast hallways with countless stalls of goods. It is a remarkable monument, not only because of its architecture but also by its influence on the shape of urban space.

As stated in Mrs. Trung Ngea's book on the history of Cambodia, after liberating the ancient capital of Angkor from the hands of the Siamese invaders, in 1431, "King Ponhea Yat or Barom Reachea II" moved the capital from the Angkor area to resettled in Toul Basan in Srey Chhor province (presently Srey Santhor district, Kampong Cham province). The reasons for changing the capital are based on several grounds, such as:

1. People: Indeed, people are the core force of nation-building. During the Khmer-Siamese war, Khmer people were killed and almost completely evacuated from Angkor, which resulted in the Angkor area having a small population and indefensible from the attack. As well as, Others fled out of Angkor.

2. Economy: Angkor was badly damaged by the Khmer-Siamese war and could not be saved in the short term, including society, economy, infrastructure, irrigation system, roads, etc.

3. Geography: Angkor is close to the Ayutthaya Kingdom, only 400 km away, which favors the Ayutthaya army and makes it easier to attack later.

Everything did not go as planned due to the unusually large flood, the resettling in Tuol Bansan was only a short period of one year. As a result, the King decided and ordered to move the capital from Tuol Basan to the Chaktomuk area (present-day Phnom Penh), where he ordered officials under the leadership of Samdech Chao Ponhea Keo and Duke Horathipadei Khieu to check the rules of the land near Phnom Daun Penh. After checking the rules and principles, the officials immediately informed King Ponhea Yat that "the area located southeast of Phnom Daun Penh is a strategically favorable position to build a new capital".

After receiving this news, the plan to develop a new capital in the Chaktomuk area was initiated. King Ponhea Yat ordered all district governors and provincial governors to mobilize the people to help in building a royal residence, fortress wall, temples, and other small and large residences within the shortest time. When the work was completed, the King went from Tuol Basan to reside at Phnom Daun Penh by waterway, accompanied by all the princes and officials in the procession.

When he arrived at Phnom Daun Penh, he ordered Chao Ponhea Techo, the governor of Samrong Tong province, to mobilize the people to fill the area around Wat Phnom and the Royal Palace. ​ So, the area also became flat until the river bank area, since then the locals called "Kampong Reap". The place where Chao Ponhea Techo asked the people to dig the rubble to fill in Kampong Reap, became a large and deep lake, the locals call it "Boeung Techo" since then. This place is the Central Market today.

Nearly 500 years later (1434-1863), Cambodia was colonized by the French after this European power had some contact with the capital, Udong, in the form of a strong protectorate to protect the border from the western Siamese claws and East Vietnam fangs. During that time, Phnom Penh became the capital of Cambodia under the French Protectorate in 1867. Therefore, in response to the growing population and as part of plans to expand this modern city, as well as to serve the circulation of products over its colony, France completely filled Lake Techo to build a large market in the center of Phnom Penh in the late 1920s (1929). Unfortunately, construction projects did not begin until 1934 due to the Great Depression.

The Construction and Renovation History of Central Market

The market is a masterpiece of Art Deco design in which a wonderful domed structure in ferroconcrete appears to hover between buildings that line the street approached likes some alien spaceship from science fiction. The unique, stunning ocher-colored, art-deco Central Market remains one of the largest domes in Asia, measuring 148 feet (45 meters) in diameter and 85 feet (26 meters) high. The four arms branch out into vast hallways filled with countless stalls of goods and merchandise. The four wide-open lanes lead to the central dome and many other small gateways allowing easy access to the market without being a nuisance to pedestrian traffic. In the early age of the market, the four squares between the four diagonal arms and the surrounding road were planted as gardens. Over the years, the garden has been gradually filled with various temporary structures, which has greatly increased the number of stalls.

As mentioned above, this area is a lake that receives runoff during the rainy season. To build, the lake was drained and construction began in August 1935 and was completed in 1937 (22 months). Since the completion of construction in 1937, Wet season flooding around the market during the rainy season has remained a problem, and this is vestigial evidence of the existence of the old lake.

After more than 60 decades of its operation after the first renovation, the Royal Government of Cambodia renovated the Central Market in January 2009. After an intensive rehabilitation of its emblematic architecture, the Central Market in Phnom Penh was reopened on May 25th, 2011 at a cost of $ 4.2 million under the fund of the French Development Agency (AFD) aiming to integrate the market into its urban environment (beautify the market as well as beautify the whole capital); enhance the historic building; provide spaces with a good level of comfort, hygiene, and safety; maintain all merchants on the site and set up a new security system for traders and residents who live there.

When it first opened in 1937, it was said to be the biggest market in Asia and became one of the major commercial centers of Cambodia from the 30s to the 70s of the 20 century. On top of that, it still operates as a market nowadays and is also one of the tourist destination spots that draw swarms of travelers and locals alike during their visit to Phnom Penh. Its central yellow dome sprouting four wings is chockful of more than 3,000 stalls selling clothing, shoes, bags, cosmetics, stationeries, and souvenirs. It is a good place for seeking a large selection of Buddha images, bronze ware, ceramic ware, kinds of cotton, folk handicrafts, jewelry, Khmer silks, pewter ware, pottery, precious stones, silverware, wooden carvings, and classical musical instruments. This dynamic traditional market is always filled with effervescent crowds from one end to the other. At the east, north, south square, and the four wings, you will find plenty of stalls such as florist shops, souvenir shops, secondhand clothes, electronic items, cosmetics, and more other merchandise that you can buy at an affordable rate (if you are good at bargaining). Inside the dome, on the other hand, is filled with unsurpassable design and style jewelry and gold ornament. In the west square, there are plenty of hawkers who sell different kinds of Cambodian delicacies, and the wet market sells fresh meat, fish, veggies, fruits, and dried products. 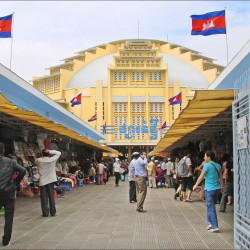 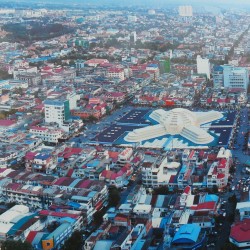 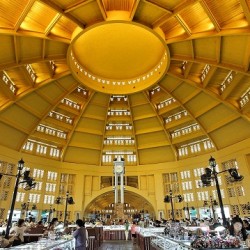 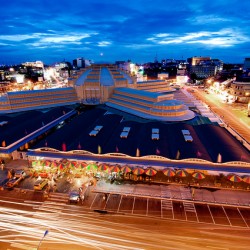 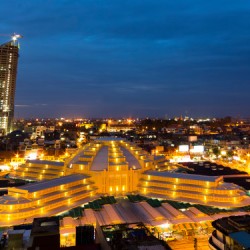 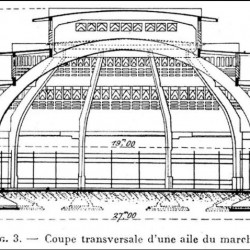 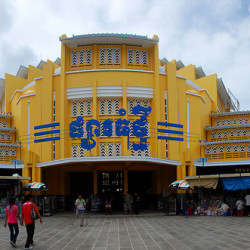 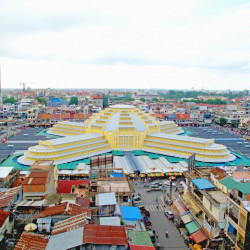 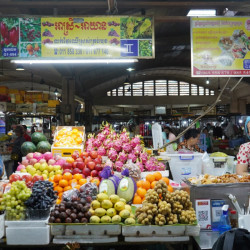 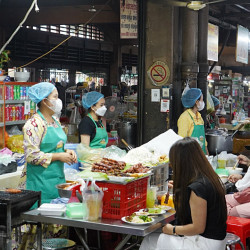 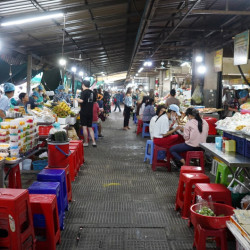 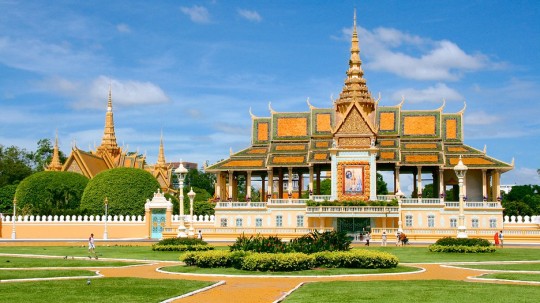