Cambodians eat a lot of fish, given the country's bountiful coastlines and one of the world's greatest heartland fishing areas. As a result, a wide variety of fish and rice dishes can be found in the cuisines of local eateries and kitchens around the nation. Fish Hamok (Hamok Trei), a meal so beloved in Cambodia that it is sometimes referred to as the country's national cuisine, is undoubtedly the most well-known indication.

What Is Cambodian Hamok Trei, Exactly?

Fish Hamok, also known as Hamok Trei, is a staple of Cambodian cuisine and a must-try for visitors worldwide hoping to gain a deeper understanding of the nation and its people.

This dish's major component is fish because Cambodians place a high value on marine species, as seen by the various festivals they hold, including the "Water Festival," named after the water itself.

Fish Hamok, a curried fish dish, is the country's culinary national icon. Fish Hamok is cooked in a steamer for tenderness and flavor with "Kroeung" paste, produced from diverse herbs and spices, and then served.

The truth is Khmer cuisine is known for its lightness and coconut flavor. Traditionally, a hefty stone mortar and pestle are used to pound the curry paste, containing components like garlic, chopped chilies, kaffir lime leaves, shallots, and more.

However, although nothing is documented about the beginnings of the dish, it is extensively considered one of Cambodia's greatest culinary gems. Because of its origins in freshwater fish, it has been forwarded through decades in lowland places.

The best part is Hamok Trey survived the Khmer Rouge dictatorship, which exterminated millions of Khmer people and swept out their customs and culinary skills. Ultimately, Hamok serves as a reminder of the cultural losses Cambodians suffered and the importance of preserving it.

How Does Fish Hamok Taste?

Fish Hamok is often likened to curry in terms of its consistency; nevertheless, whether it is dried or juicy depends largely on how it is made. Generally, the juicy Hamok Trei is made with fresh fish and paste. If the fish has been frozen for more than a few days, the fish's meat will be dried. Also, the fresh paste, especially coconut cream sauce, will melt inside your mouth after the first bite, making a delicate and thicker nutty flavor.

Moreover, Cambodian people nowadays do not eat Hamok Trei daily. The dish is only served in Khmer high-class cuisine restaurants. Therefore, it is more likely to represent Cambodian culture and traditional culinary cuisine.

What Are The Ingredients of HAmok Cambodia?

Hamok is usually made up of fishes; in other words, Khmer people call it Hamok Trei (Fish Hamok). As the name suggests, fish and pastes are used to make this flavorful and nutritious dish. In the old days, Khmer people used freshwater fishes that were caught along the Mekong River or Tonle Sap. Those fishes are typically catfishes and goby fishes.

The following ingredients are the Hamok paste, and they are the key factors making Hamok at its best taste: turmeric, lemongrass, galangal, garlic, red pepper, kaffir lime leaves, and other sauces such as palm sugar, fresh coconut cream, fish sauce, and eggs.

How To Make Hamok Trei?

You should know that there is no standard operating procedure for making fish Hamok, as it has been handed down traditionally over the years. Because various cooks prepare the dish in unique ways, such as frying or microwaving, the conventional method is to steam it. Steaming Hamok is the most efficient and best method.

Hamok-making is likewise divided into two stages. The first step, which is also the trickiest, is to make the paste (Kreung). Then, you can begin by carefully chopping the ingredients (turmeric, galangal, kaffir lime leaves, lemongrass, and garlic) into tiny pieces. After that, mix them together with a few tablespoons of palm sugar and some drops of fish sauce. Then, you can start pounding them together until it is sticky and moist.

Making Hamok Trei or Fish Hamok by following the traditional cooking way is the most time-consuming and exhausting procedure among other dishes as it requires a lot of ingredients in the mixture as well as time to make it.

However, local or international restaurants that have Hamok on their menu try to change the way to make Hamok Trei nowadays. Therefore, local cooks or chefs are likely to shift a pounder to a blender instead in order to pound the ingredients faster. In addition to providing a genuine Khmer culinary experience, pounding is a part of physical exercise as it requires repetitiveness and strength to do it.

After pounding the paste (Kreung), fishes need to be washed and cleaned for filet. The fish filet needs to be cut into smaller chunks so that it is easy to mix them with Kreung (the paste). However, each cook can decide the fillet size as it has no fixed standard side. Anyway, you will find different sizes of filet fish in your Hamok from various restaurants. The next step is to fill in some coconut cream along with eggs before blending.

Eventually, let the fish marinate for roughly 60 minutes. Once it is done, steam it in the steam cooker and serve the dish with a banana leaf as a base.

Hamok can be done in many ways including fish Hamok, chicken Hamok, beef Hamok, snail Hamok and more. With the versatile cooking approaches, this amazing dish provides, chefs and local people have their cooking techniques to make a tasty Hamok Trei. Moreover, the food will be prepared uniquely if you visit ten multiple locations. Some will prepare it with a steam cooker while the other people use a frying technique.

Furthermore, since Khmer cuisine is often served on the light side, certain cooks choose not to include the eggs as they believe it would make the dish too heavy. This is one of the primary reasons.

On top of that, Hamok could be prepared in many other alternatives, such as steaming the sauce and fish in two pots, using things like crab meat, and mushrooms, or even decorating the banana leaf.

Hamok Trei or Fish Hamok exemplifies the diversity of approaches to Khmer cooking methods that have existed in Cambodian culture for centuries. 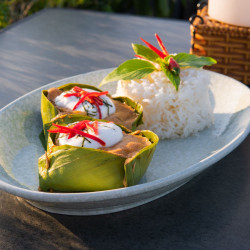 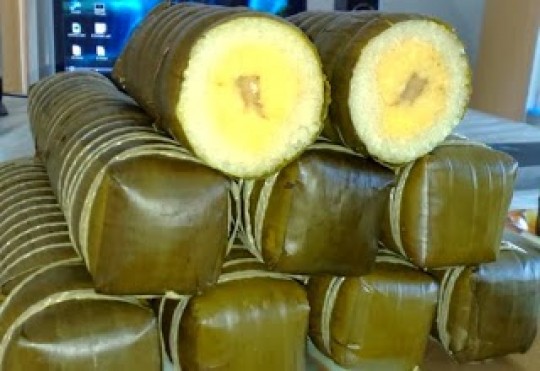 Num Ansorm is a rice cake that most Khmer people always make the cakes every year, and nev [...] 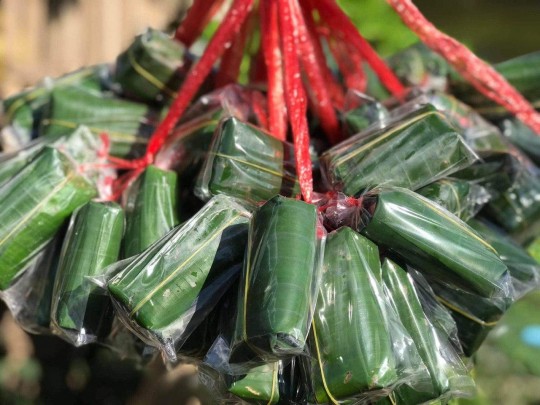