Khmer folk dances are highly spirited dances that follow popular themes with lively movements and gestures. Dance motifs are usually based on local legends and the everyday life of the people. Dancers dance with easy, improvised yet composed movements that are designed to invite humor and enthusiasm, with upbeat music and rhythm. Many dances are accompanied by drums and instruments from the Mahori and Pinn peat ensemble. One of many popular Khmer folk dances is Robam Nesat (Khmer Fishing Dance).

Traditional dancing is such an important part of Cambodian culture that no trip to the country would be satisfactory without seeing a demonstration. Records and tales of the Angkor empire have been written on every temple’s wall for many centuries. If you ever visit the Khmer temples, you will see celestial dancing dancers inscribed and carved on the wall, dancing for the Gods and portraying them in heaven.

However, in the Pol Pot regime, more than two-thirds of Cambodian citizens were slaughtered, starved, and sick to death. Also, all other Khmer traditional arts and dances were diminished because Pol Pot tried to finish off all Cambodian scholars and intellectuals during that period.

After 3 years, 8 months, and 20 days, a lot of work has been done to bring this old art form back to life. Since then, Cambodia has regained its traditional dances back through inscriptions and other discoveries.

As of today, the traditional Cambodian dances are categorized into 3 genres, such as classical dances, folk dances, and social dances. Each of them is performed to serve different purposes and occasions.

What Is So Important About Cambodia's Traditional Dances?

Khmer people use dance to transcend mere amusement and are a spiritually significant form of art. Each kind of dance is designed from imagination and emotion that can be seen in every dancer’s posture, gesture, and other complex expressions. Therefore, all of the movements depict indeed feelings and meanings through the dancers.

There is a wide variety of dances that are performed in Cambodia, ranging from intricate dance performances about war, romance, and magic to pure dance styles that originate from Cambodian culture.

Every dance has distinguished characters that all play important roles in the progression of the plot as they take on the roles of the scene tales. On top of that, they are equipped with special or magical weapons as well.

A hunter with kangcha and a deer are examples of Trot dance's characters and weapons. Trot dance is one of the most popular Khmer dances, representing good luck for the new year.

Furthermore, another example is fishermen with Ang Rut and Chhneang (Khmer traditional fishing equipment) are also the characters in the Nesat dance. The dance is designed to present how the old Khmer people along the Tonle Sap river did fishing.

Different Khmer Traditional Dancing Styles - What Are They?

So, there are generally 3 types of Cambodian traditional dances (also known as Robam Khmer), including folk dances, social dances, and classical dances.

To begin with, folk and classical dances are designed to depict the Gods, the old Khmer living, or offerings, whereas social dances are mostly performed at parties or gatherings.

Khmer classical dances consist of Apsara and Wishing dance, which are the most well-recognized worldwide. Also, Robam Preah Reach Trop is popularly performed locally besides the other two.

There are many other dances that are considered Khmer classical dances, including Neang Sovann Macha, Preah Thong Neang Neak, Tep Monorom, Phlet, and Monosenchetna dances. However, they are not as popular as the previously mentioned dance names.

Furthermore, social dances are seen on particular social occasions, such as parties, weddings, or gatherings. The dances include Ram Kbach, Ram Saravan, and Ramvong.

Other than that, Khmer folk dances consist of many dancing styles, which have different names, including Trot, Neary Chea Chour, Sneang Tosoang, Nesat, Chhayam, Kom Areak, and Ngaok Pailin dances. Among all of them, Robam Nesat, Nesat Dance, or Khmer Fishing Dance will be selected to discuss in further detail in this article.

Traditional Folk Dance refers to all kinds of dances that are passed on from one generation to another and that are often linked to an ethnic group's traditional ceremonies.

In Cambodia, traditional dances mostly involve animism and express beliefs in the supernatural. When people have problems thought to have been caused by the supernatural or spirits, they offer lively dances to appease them.

Folk dances are performed at religious ceremonies, festivities, and leisurely entertainment. Traditionally, all dances were performed in the village in large clearings or public areas at times of birth, marriage, death, during planting and harvesting, hunting, war, or at a feast.

Some dances are related to Buddhist beliefs such as Kgnork Pailin and Trot dances. Others are performed once a year according to various spiritual and ceremonial calendars.

There is a saying in Cambodia "Where there is water, there are fish". There is a lively folk dance describing the daily life of Khmer farmers and fishermen, who dance with traditional bamboo fishing equipment such as Ang Rut and Chhneang.

In this dance, you see two traditional methods of catching fish; the use of braided bamboo baskets called Chhneang and bell-shaped traps are known locally as Ang Rut. Young women scoop water from the river into their Chhneang which act as strainers.

As the water drains through the bamboo strips, small fish are trapped in these baskets. The men would use the Angrut for catching large fish in shallow water.

Love and romance are favorite themes in Khmer stories and dances. In traditional Cambodian society, young people are carefully watched and have few opportunities to get to know another.

But the fishing quarter is one place they have a chance to meet. The charming courting scene ends the piece with playful teasing among the young men and women, making this dance very popular among audiences today.

The dance was choreographed in 1967 by Mr. Vann Sun Heng and supervised by Prof. Chheng Phon. It was performed from 1967 until 1975 and has been revived since 1979.

At the beginning of the dance, young men come down to the river on one side and women on the other. The dance expresses their joy; how happy and excited they are when they meet each other. As they fish, they flirt with each other. The boys playfully snatch the girl’s fishing baskets and they make merry.

Like many other forms of Khmer Folk dance, Robam Nesat is also performed at religious ceremonies, festivities, and leisurely entertainment. 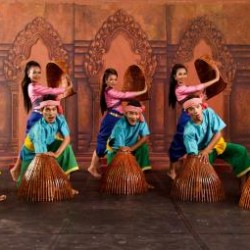 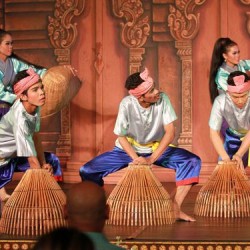 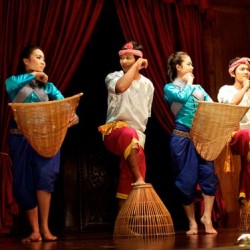 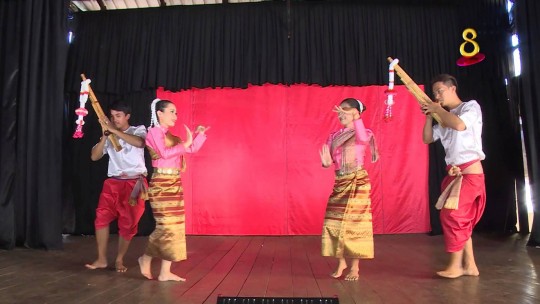 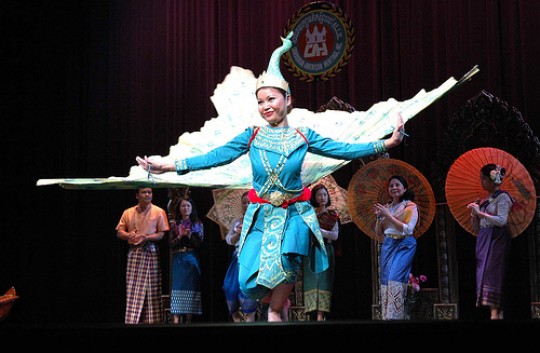 The dance was choreographed by Prof. Chheng Phon and Prof. Pol Som Oeurn in 1965. Performe [...]