According to the book Inventory of Intangible Cultural Heritage of Cambodia, Lakhaon Khaol is one of the oldest forms of Cambodian performing arts practiced as early as the Angkor period. It is believed to have started approximately in the 9th century in accordance with bas-reliefs found on Angkor temple walls. During this: Angkor period, lakhaon khaol was developed as an entirely male version of Khmer classical court dance.

The exact reasons are still unknown but some research has pointed to the form growing out of a religious context in which Brahmanism was in conflict with Buddhism during the reign of King Jayavarman VIII (1243-1295). During this time, many female dancers were killed and others were taken on as concubines. Training male dancers was an opportunity to recreate a dance form based on Buddhist doctrines,

The only story specifically performed by lakhaon khaol is the Reamker, the Khmer version of the Ramayana. The performance is accompanied by storytelling. with the narrators playing a key role in directing the performance, it is accompanied by the traditional pin peat orchestra. There is a list of various repertory of Lakhaon Khaol such as Chambang Peal Yub (the Battle at Night), Chambang Kompikar (the Battle of Kompikar), Preah Ream Choul Kaot Banhchhaot Neag Seda (Preah Ream enter the Bodt Urn to Cheat Neang Sita), Seda Luy Phloeung (Neang Sita walking on Flames), Preah Ream Der Tes (Preah Ream’s Exile in the Forest), Preah Ream Chong Tnaol (Preah Ream Building a Dike to Lanka), Sangream Virul Chambang (the Battle of Virul Chambang), Sangream Indrachit (the Battle of Indrachit), etc.

Lakhaon khaol was very popular in the Lon Nol regime and later a favorite of King Sihanouk. At that time, there were eight professional troupes. The troupes were disbanded during the war and today the only original troupe remaining is that of “Wat Svay Angdet”, 15 kilometers from Phnom Penh. Two new troupes have formed since the war, which include the Kompong Thom troupe and the troupe of the National Theater (Department of Performing Arts of the Ministry of Culture and Fine Arts.) Moreover, Lakhaon Khaol also forms part of the curriculum at the Royal University of Fine Art.

According to the official Facebook page of the Ministry of Culture and Fine Arts (Cambodia) on 28th December 2018 at 3:00 pm (local time), UNESCO inscribed the traditional Cambodian dance drama genre Lakhaon Khaol on the List of Intangible Cultural Heritage in Need of Urgent Safeguarding in Port Louis, the Capital City of Mauritius.

Where you can find this drama dance?

Lakhaon Khaol Wat Svay Andet is practiced in one community surrounding a Buddhist monastery, Wat Svay Andet – located about 10km east of Phnom Penh on the Mekong River – and is performed by men wearing masks to the accompaniment of a traditional orchestra and melodious recitation. The specific aim is to propitiate the Neak Ta (guardian spirits of a place and its people), thereby protecting and bringing prosperity to the community, its lands, and its harvest. When Lkhon Khol is performed, spirit mediums are present and facilitate interactions between the Neak Ta, performers, and villagers. When the spirits are satisfied with the performance, villagers are blessed by them; otherwise, the dancers stop, the music continues, and the audience falls silent and carefully listens to the spirits. Lakhaon Khol is performed for ritual purposes, mostly linked to the cycle of rice farming and the needs of farming communities. 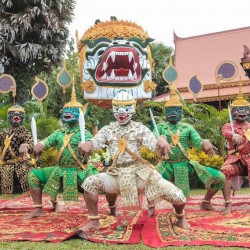 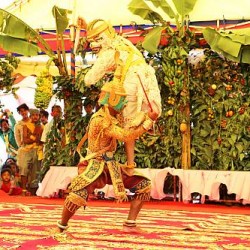 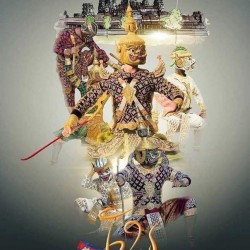 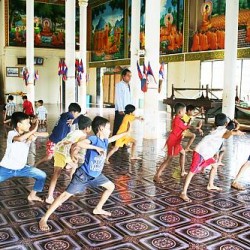