Independence Monument, or Vimean Ekareach as it is referred to in Khmer, is a majestic structure that dominates Phnom Penh city center. Erected in 1955, the Independence Monument symbolizes Cambodian Independence gained from French colonialism in 1953. It stands at the intersection of Norodom Boulevard and Sihanouk Boulevard in the center of the city.

The Monument, in traditional Khmer temple form with a refined sense of proportion, sits with an appropriate air of solemnity at the center of a traffic circle at the junction of two Boulevards as Sihanouk and Norodom Boulevards.

The independence monument was constructed to demonstrate amazing traditional architecture during the Angkor empire. The monument was built by the most well-known Cambodia-born architect and legend, Vann Molyvann.

Furthermore, the one-hundred Nagas and snake motif can be seen in historical, cultural, archaeological, and business contexts. It is in the form of a lotus-shaped stupa, of the style seen at Khmer temples such as Bakong Temple (a temple from the Rolous group of the 9th century), Banteay Seri, and other Khmer historical sites.

Regarding the structure, multi-headed snakes decorate the lotus bud's five tiers, which are 20 meters tall and reddish-brown in color. Evening shadows cast over floors enhance the beauty of their complex patterns. However, nighttime is the most beautiful moment when this amazing structure shines.

Therefore, this traditional building will show its real beauty during the nighttime as it is decorated with 3 lighting colors, white, red, and blue. The three-light colors will illuminate the building from every angle along with the surrounding fountain. Also, these colors will shine like the Cambodian flag. Furthermore, on the eastern side of the monument lies a beautifully landscaped outdoor park that is suitable for running, cycling, and taking in the fresh air.

In addition, government officers from all ranking levels, ministries, and organizations gather at the independence monument to commemorate an annual independence day on 9th November.

The commemoration is taken to offer respect to all the brave souls of soldiers and heroes who sacrificed their lives for the country’s independence. Moreover, policemen and armed forces along with the military band march along the blvd to the independence monument during the ceremony. Then, the King will light up the torch (glory torch) inside the building and colorful balloons will be flown to the sky during the ceremony. Anyway, where is the Independence Monument exactly?

The independence monument was built at the heart of Phnom Penh city. However, as the city expands due to massive real estate development, you may no longer find this traditional building in the center. Therefore, we will give you some clues if you ever come to Phnom Penh and want to find it.

So, the independence monument is a roundabout for the two main boulevards, Norodom Blvd and Sihanouk Blvd. Simply speaking, if you travel from any location, just tell the drivers to drive along these two boulevards. You will see the monument building at the intersection. Furthermore, this traditional structure is based on a few streets from Boeung Keng Korng, Sisowath Quay, and Royal Palace, which are Phnom Penh’s significant landmarks.

What Does Lotus Flower Represent?

Cambodians consider the lotus a national flower. In Buddhist and Hindu beliefs, Buddha symbolizes the flower. On top of that, you will see that lotus ponds surround all Cambodian pagodas. The lotus flower is often depicted in Cambodian art and literature, both of which are filled with references to the country's rich religious heritage.

In addition, the flower is a member of one of the most prevalent plants in the nation and may be found growing naturally in lakes, ditches, streams, and rivers throughout the country. Also, the old Khmer people who like beautiful blossoms often grow the lotus in areas in which the plants do not naturally grow. Finally, lotus flowers are thought to signify spirituality and purity as they appear above the muddy water.

Regarding the aroma, the sweet lotus may range from mild and subtly delightful to strong and overwhelming, depending on the type. The flower is always there, whether it is a wedding or banquet.

The Uses of Lotus - Cambodian Culture

There are several medicinal uses for all lotus pieces, ranging from stamens, roots, and petals to stopping inflammation and treating coughs and gastrointestinal issues. Plus, the flower carries substances that help lower blood sugar levels and swelling. When talking about cuisine, lotus flowers have been put in Cambodian foods for a long time. Cambodia has the oldest cuisine that puts lotus as a part of the ingredients to increase tastes and textures.

Moreover, the Cambodian people usually use lotus leaves to wrap food and vegetables. Sometimes they cover their head while walking outside. However, cooking the lotus root increases its sweetness and consistency, making it more like a potato in taste as it has a crispy texture. On top of that, the flowers and seeds are often dried to make nuts, which are similar to cashew. They are crispy, crunchy, and less sweet, making them the most favored snack. Lastly, the lotus petals are used to produce tea and infusions, which are very popular as well.

What Happens During a French Colony?

Back in the early years of the 1860s, it was thought; however, that the Mekong River, and by extending the country of Cambodia, might serve as a route to China by French geographers. By that time, the French explorers had already occupied and colonized the southern part of Vietnam. Because of this, they were interested in expanding their territory there.

During the time of the French protectorate, many unfavorable conditions were executed on the people of Cambodia and the country.

The French protectorate's greatest flaw was arguably its failure to teach Cambodians and provide them with no possibilities to engage in any political sphere prior to the 1940s. Despite their best efforts, they failed to equip the nation for liberty adequately. Also, it is sad to say that the whole country acquired only one high school with no university at all.

The judiciary was just another aspect of the colonial administration that was dysfunctional. The French did not implement a comprehensive judiciary system, and virtually none of the local attorneys or judges acquired proper legal training during that time. 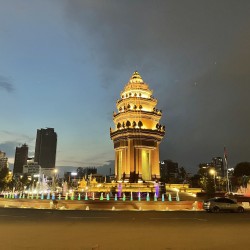 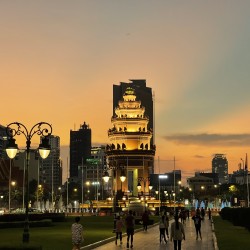 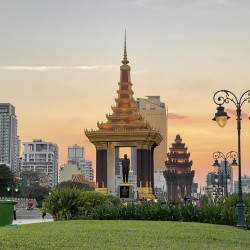 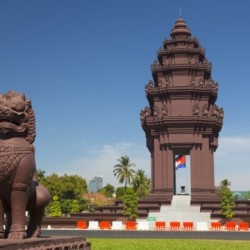 2. Helen Grantross (2007, November 07). The enigma of the Independence Monument. The Phnom Penh Post. Retrieved from https://www.phnompenhpost.com/national/enigma-independence-monument

The Buildings of the museum are inspired by Khmer temple architecture. There are more than [...]