There were different flags used as the national flag of Cambodia since 1863. The Cambodian flag has three stripes and the middle one is larger than the blue ones which are at the top and the bottom. However, the middle stripe is red with the Angkor Wat in the middle of the flag.

What is The Meaning of the Cambodian Flag?

The Flag Design and Layout

Ideally, the flag is constructed in a rectangular appearance. It comes with a horizontal band that has a 25 x 16 ratio. The flag’s appearance is made up of 2 different colors, the blue color on the top and bottom, and the red color in the center.

Moreover, the red stripe is twice as wide as the blue one. Plus, it has a white picture of Angkor Wat, Cambodia's national emblem, in the center. There are only 2 identical national flags that you can find in the world. One is Cambodia, the other is Afghanistan.

You may wonder how many flags did Cambodia have? Actually, there are ten different flags over a wide range of historical flag revolutions since the middle of the 19th century. It was initially introduced in 1948 while our nation was still under the French colony and was preserved when the nation acquired independence from France in 1953.

When the Khmer Republic was established, a new flag was adopted in 1970.

Six additional official flags were flown after that. This consisted of the UNTAC flag, which was carried from 1992 to 1993 till Cambodia was reinstated in 1993 when the nation returned to the monarchy system. There had been a wide green line around the yellow triangle pennant used by the "Kingdom of Cambodia" before 1863.

The Kingdom of Cambodia was a French protectorate in 1863 when it became a French colony. The accepted flag included a red field surrounded by a white representation of Angkor Wat located in the center of the flag area with a wide blue border.

In 1887, there had been the creation of the Indochinese Federation, which included Annam, Tonkin, and Cochinchina, as well as Cambodia, under French rule. The French tricolor flag was flown above the Cambodian national flag to commemorate the unification,

During Japanese dominance of Cambodia in March 1941, the Japanese established a red background, centers with a big square covering another tiny square. To connect between the square line, they also used four corners to connect the dots and conducted it as an official flag in that era. After World War II in 1945, the French Protectorate's flag was restored after Japan's defeat.

In 1953, an identically shaped latest flag was approved to be used when Cambodia won political freedom from France. This design included a red field that has a blue ribbon across the top and bottom, and its design's middle is filled with white Angkor Wat.

After an army revolution in 1970, the nation was renamed the Khmer Republic and had an autocratic government. The flag was featured with a big blue background that its upper right side filled with three white stars, and white Angkor Wat framed in the red rectangle on the upper left side.

Cambodia was renamed Democratic Kampuchea when the Khmer Rouge’s leader, Pol Pot, took power in 1975 and seized power and control over the county. The pol pot flag is a simple red background featuring a three-towered yellowish castle inspired by Angkor Wat in Cambodia.

The Salvation Front assumed control in 1979 following the Vietnamese take over the nation and established the People's Republic of Kampuchea. Angkor Wat-inspired yellow towers decorate a simple red background in the center of Cambodia's flag.

On January 1, 1990, when Khmer converted to the State of Cambodia, its official elaborated yellow portrayal of Angkor Wat placed the horizontal blue and red bicolor as the background in the center.

To restore stability to Cambodia, the UN regained control of the country's government in 1992. UNTAC's flag had a light navy blue plain and centers with the country map in white color with "Kampuchea" in Cambodian language written in blue in the middle.

The United Nations is a peacemaker that works on a mission to maintain world peace. UNTAC was established to bring stability to a nation that had been devastated by years of violence. It was the first time that the organization seized over the government of a sovereign entity and successfully organized and conducted an election in that nation's history.

The post-French sovereign flag was established in 1993 when premier elections were conducted after the Khmer Rouge, and the monarchy was reinstalled. And this design of the flag has continued to be used until now.

It is very fitting that the country's flag features such a majestic monument as Angkor Wat. Because the flag is the pride of the nation, as well as the world's greatest religious place, a prominent actor has helped to establish the country's position on the worldwide stage.

Is Cambodia's flag the only one with a building? We are not the only country to put its sacred and/or national buildings in the middle of the national flag. Portugal, Spain, and Afghanistan also do the same thing.

Indeed, blue and red colors are the Cambodian traditional colors. As mentioned earlier, the blue describes the monarch or the King while the red one portrays the Khmer people who have been through the war. On top of that, Angkor Wat is built in the representation of Theravada Buddhism, which is our Khmer religion. 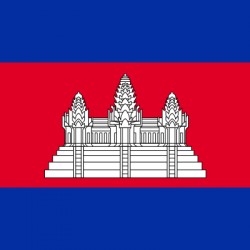 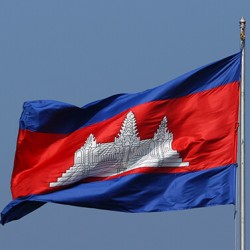