Cambodia is one of the countries that still ruled under a monarch of royal family. There are a number of royal ballets that are usually performed in special national occasions.

Lakhaon Poul Srei is the female version of Lakhaon Khaol (classical male masked theater), which literally translates as 'female narration'. Both forms combine classical theater and dance and are accompanied by the traditional pin peat orchestra. Unlike Lakhaon Khaol, which use a separate group of narrators, Lakhaon Poul Srei dancers take turns narrating while other members continue to dance. The dancers often lift their masks and narrate directly to the audience.
Read more 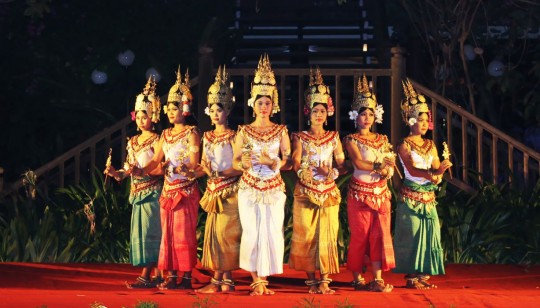 There are many classical dance forms in Cambodia, of which a highly stylized art form was once confined mainly to the courts of the royal palace and performed mainly by females. Known formally in Khmer as Robam Apsara, the dancers of this classical form are often referred to as Apsara dancers. Apsara Dance is one of many dances in the Khmer Classical Dance. This dance invented in the mid-20th Century by the Royal Ballet of Cambodia, under the patronage of Queen Sisowat Kosamak. This dance form was first introduced to foreign countries and best known during the 1960s as the Khmer Royal Ballet. The first royal ballerina was Princess Norodom Sihanuk.
Read more